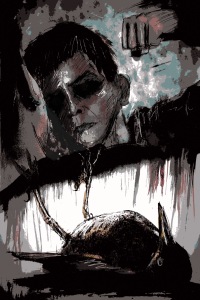 The world is full of ghosts. We see them everywhere. Mam sometimes calls them other names, says they’re husks, or shells, or fakes. But it all means the same thing.

Ghosts look just like real people. They smell like real people too. But they’re not. Real ghosts aren’t like the ones on the telly. They don’t move through walls, or haunt people in their houses, or make silly whooshing sounds. The people on the telly who say they see ghosts don’t know what they’re talking about. They haven’t got a clue.

Most people don’t realise there’s ghosts everywhere, but that’s because they’re ghosts too, even if they don’t know it. Most people don’t have the light, you see. Mam says only real people have the light, but there’s not many of us. Only ones round here are me, Mam, and our Susan. We have to be right and pure, because that’s the only way we can keep hold of it. Mam says this world is a bit like a school. We have to look after the light, keep it safe until we can go to the real world. That’s why there’s so many ghosts everywhere. They’re part of the test.

I remember the first time I punched someone. I curled my fist into a ball and hit Pete Collins—he’s a boy from my class—right on the jaw. It felt good. He fell over, and everyone saw, and that shut them up for a while. They dragged us off to the head’s office and asked why I did it. I said it was because he’d been working me for ages, saying things about Mam that weren’t true, saying no one likes our family. Funny thing was, when my fist touched his face it felt just like a real face.

I found a dead bird in the park once. It was still warm.

I asked Mam about Dad a while ago, asked where he was, why he didn’t live with us. John and Paully Brewiss—they’re two other boys from school—their dad works offshore drilling for oil, on one of them huge platforms they build in the sea. I thought maybe Dad was off on one too, or maybe he was off in the army, fighting the Taliban. But she said I didn’t have a Dad, that she had me and our Susan by herself. I said, you mean like baby Jesus and Mary? And she said yeah, a bit like that. I thought I could remember Dad from when I was a bairn, when our Susan was only small, but Mam says I’m not remembering right.

There’s a lady from the council who comes round to see us sometimes. She says she just likes to check we’re doing all right, but Mam says she’s not to be trusted, so I don’t tell her much. And I don’t like the way she looks at me.

Mam likes to watch the news on the telly in the evening. She has a little book and a pencil, and she writes things down when she sees them. She’s looking for clues, things that happen in the world. The other night there was an earthquake in a foreign country somewhere. There were bodies in the rubble and people crying and praying. It doesn’t bother Mam, though. She says it’s one of the ways you can tell that people are ghosts. Because if that were real people dying, it’d be wrong. She says the people praying are daft, as if God would let that happen to real people. But Mam says they’re not real, they’re ghosts, and so it doesn’t really matter. She says when I’m older she’ll show me her book, tell me what it all means.

When real people get hurt, it’s different. I cut my knee once and it was bleeding everywhere. It got infected too, all green and minging. Mam said it was part of the test, but I’d be okay. We’re only given what we can put up with. Only ghosts get the really bad stuff.

Mam’s been in bed all day, and she won’t eat. She said I had to keep an eye on our Susan, and she’d be better soon. The lady from the council came round earlier but I kept the curtains closed and pretended we weren’t in. I didn’t know what she’d do if she knew Mam was in a bad way.

Pete Collins’s skin felt just like mine, or Mam’s or our Susan’s. And he bled just like we do, and he yelped in pain just like I do when I get punched. When it happened I asked Mam what it meant, but she just said it has to be that way. Pete looked like he was hurt, but there’s really no one there to be hurt. Even if he died, it would just be like something being broken, like a vase dropping to the floor and cracking apart. But she said I still shouldn’t go around thumping people, because that’s not how you look after the light.

Sometimes I wish there was more of us.

I got back from school and Mam was in bed again, sleeping. The skin on her forehead felt like Pete Collins’s skin, only colder. After a while she woke up again, her eyes pulling half open. Our Susan wants to see you, I said. She looked at me like she was empty inside, like there was nothing behind her eyes. Our Susan started to cry, and I thought, what will we do if Mam’s lost the light?

Anton Rose lives in Durham, U.K. His fiction and poetry has appeared in a number of print and online journals, and he is a Writers of the Future winner. Find him at antonrose.com or @antonjrose.

<– What Can Be Seen, by Premee Mohamed

The Black and White Reproduction, by Becca Borawski Jenkins –>