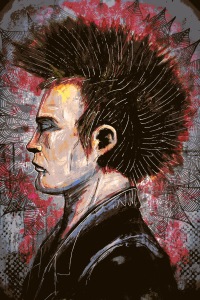 It’s one of those annoying situations where someone is walking really close behind you with all this change jingling around in his pocket, and he won’t go around you when you slow down, and when you speed up, he speeds up too. It’s the pedestrian’s version of tailgating. You’re cursing this individual under your breath, totally convinced he’s messing with you. When you bend down and pretend to tie your shoe, he finally passes in a whirlwind of nickels and dimes and cologne. You almost fall forward and yank the little plastic thing off the tip of your shoelace. When you stand up, you chuck it into the street where it bounces once and rolls under a tire. You glare at the back of the tailgater’s head, studying him. Business suit and converse. Briefcase and a Mohawk. You want to compartmentalize him, stick him in box, but he eludes categorization. You could call him a hipster, but that seems too easy. Instead, you opt for human Mad Lib.

Strolling past Dugin’s Grocery, the tailgater grabs a milk crate from the top of the stack without slowing down. He starts whistling, probably the tune of some neo-punk Wall Street jam, and you walk faster, not wanting to lose this criminal in the sidewalk rush hour traffic. He swings the milk crate and the brief case in rhythm with the tune he’s whistling, and you ruminate, imagining Mr. Dugin and his son coming out of their store at four o’clock in the morning and finding themselves one crate short for—whatever they use them for. Whatever anyone uses them for. Moving? Shoe storage? Old textbooks? The tailgater bangs the brief case against his hip and shakes the milk crate, his version of a drum solo. Maybe he has an over-sized collection of LPs, vintage and cool, but warped beyond resale value. Nothing left to do but stuff them into milk crates and shove them in a closet. He probably doesn’t have a real reason for stealing the milk crate. He thought it was cool and spontaneous, something to tell his friends about over a pint of Pabst. What does he care if Mr. Dugin and his son go out of business because of that one stolen milk crate?

You want to confront the tailgater, cause some serious cognitive dissonance, present his true self and set it beside his own self-image of the ultimate cool Mohawk persona in Armani. You clear your throat and begin conceptualizing your speech. Concise, humorous, subtly cutting, the tone dry, but not condescending. You try to remember the name of the optometrist in The Great Gatsby and those giant eyes that were watching everyone, but can’t. Too bad. That would have been cool, literary, and just subtly self-righteous.

The blinking DON’T WALK stops blinking and you pause, a few strides behind the tailgater. A rusty white van is stopped at the light on McGuinness Boulevard. Three guys sit in front, squeezed together, laughing and flipping radio stations. They pass around something silver and shiny and the thought of having that white van on your tail gives you the shivers. The guy in the driver’s seat looks at you. His arm is covered in tattoos, and he sticks two fingers up in a “V”, slithers his tongue between them. You turn away, look at the tailgater, who is still swinging his milk crate and whistling. The guys in the van elbow one another and point toward the tailgater. When the light is about to turn green, they scream “Fuck you Faggot!” and peel away just as the light changes.

The tailgater loses his grip on the milk crate, and it skids into the street. Horns honk and cars swerved to avoid the big, blue obstruction. He runs out and makes a grab for it. A yellow cab almost smashes into him. He tries to step away from the crate, leave it for dead, but by some crazy miscalculation, he steps into it. He trips, loses his balance, and almost topples over into the oncoming traffic. His arms flail. You should reach out and grab his hand, pull him and the stupid milk crate back on the sidewalk. Instead, you stand there, a few feet away from the curb, imagining yourself doing it. Somehow, he manages not to fall. He regains his balance, steps out of the milk crate, and just leaves it. He runs the rest of the way across the street, weaving in and out of traffic. Horns blare. Finally, he reaches the sidewalk and you let go of a long, jagged breath. From your safe place, you watch him until he disappears.

When you’re free to cross the street, you pick up the milk crate and carry it. You stand in front of your building on Manhattan Avenue deliberating about what to do with it. If you bring it back to Dugin’s the next day someone might see you, and think you stole it. There are no extra shoes or old textbooks in your apartment. No warped LPs to be stowed away. You don’t need a makeshift end table with a tapestry thrown over. You don’t have anything extra or need anything extra, but for some reason it’s really hard to leave that milk crate on the curb, and go upstairs alone.

Irene McGarrity‘s fiction is forthcoming in Hobart, and has appeared in DOGZPLOT Flash Fiction, Oasis Literary Magazine, and Prima Materia. She is an MFA candidate in creative writing at the New Hampshire Institute of Art, and you can find her blog, Metawriting, at irenemcgarrity.wordpress.com

<– The Sound That Carries Across the Ocean, by Beth Goder