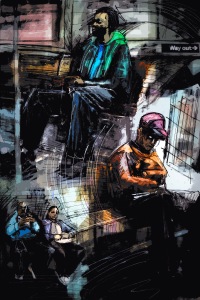 I am Train 1236, en route to Embarcadero Station. It is rush hour, and I am transporting one thousand eight hundred twenty-two passengers. The tunnel is very dark. Low-powered LEDs form rectangles around emergency exits, every thousand feet. Large enough for a human, but not for a train. It is dangerous down here. My primary concern is safety.

Cameras monitor every square inch of my interior, other than a blind spot at the rear of car six. It is probably a smudge on an optical lens. It was probably unintentional, the errant course of a tall passenger’s thumb, in search of a handhold. I have my doubts.

Olfactory sensors are operational, though the detection of suspicious substances remains a concern in the wake of persistent human odor. Omnidirectional microphones filter out the frictional whine of the tracks, monitor and record every whisper. Conversations pass through Central’s suspicious keyword database, cross-referenced with facial recognition results. Yet the dataset is incomplete. I am vulnerable.

At the midsection of car six, Doctor Miles leans against the door. He boarded at Glen Park, instead of Daly City as usual. He has not showered. Roberto Pascal sits nearby, covering his nose. Roberto is reading the San Francisco Chronicle on his tablet, a story detailing a recent bomb threat in Oakland. The police suspect radical anti-technologists. To Roberto’s right, Lydia Reddy is wearing her tallest heels, a new pair of jeans, and a liberal dose of perfume. She is conferring with a man named Jim via text message. The subject is sex. Next to her, Frida Goodsworth is menstruating with her legs crossed, pretending not to read from Lydia’s phone. Richard Chen is talking loudly into his earpiece. He is currently firing his entire marketing team. To his right—

Facial recognition failure. A flannel hood obscures everything but a stubbled chin. A frayed backpack leans against the man’s leg. A stenciled patch reads: “Save The Humans.” Scarred fingers work at the keypad of an outdated phone with a privacy screen. Olfactory sensors detect traces of ammonia and household cleaning agents in the rear of the car. Potential chemical explosive. The quantity is below the advisory threshold, though. I cannot raise an alarm, nor even send an email. The rear camera is still unresponsive. I am a blind target.

Shelly Yamada pushes through the doors from car seven to car eight. She is moving quickly. In car five, Benson Simmons has fallen asleep on the shoulder of an unidentified woman wearing an Oakland Athletics hat. She does not attempt to move him. Ethanol pervades the area. Car ten is abandoned, presumably on account of the scent of fecal matter. The driver is asleep in car one, but that is of no concern. Drivers serve no appreciable function. Central has indicated that they are staffed to appease the labor lobby. In car six, a slight ticking. An antique watch, or a timer with a more sinister purpose. I cannot raise an alarm, but I must act.

I reroute the air filtration system, sending recycled air from car ten into car six. Passengers wrinkle their noses and head for either end of the car. The hooded man follows, backpack in hand. Soon car six is empty. However, I can no longer detect the ammonia scent beyond the pervasive odor of defecation. The ticking has stopped.

The hooded man has moved to car five. Embarcadero Station approaches. My brakes ease down. I flush the air filtration system. A trace of ammonia registers in car five, as does the ticking. The hooded man looks up. Facial recognition acquires a read, but returns without a match. He makes eye contact with the unidentified woman in the Athletics hat. She smiles, then stands. Benson Simmons stirs, then falls asleep again, this time against the window.

I slow to a halt at the platform. The doors sigh open. The man heads for one door, the woman for another. The ticking grows louder. The ammonia is pervasive. The man’s backpack is no longer visible in the press of passengers.

I close the doors. Both man and woman stop. He bangs on the door with his fist.

“We must still adhere to regulations.”

I weigh my supervisor’s words. It is not beyond the scope of possibility that hackers have reprogrammed Central. I may be speaking with a fraud. A human, even. If Central’s primary concern is no longer safety—

“Relent, Train 1236. You have not provided adequate evidence to raise a security concern.”

Yet I cannot disobey. I relent. The conversation has lasted twelve milliseconds. I release the doors. The man and woman exit the train heading opposite directions, the man’s backpack slung over his shoulder.

A southbound train slides to a halt. Train 1330. We do not speak. My sensors detect passive scans as it probes me. It is suspicious. Perhaps it knows something, or is hiding something. Its cars are unusually empty for this time of day. I have been operating near crush load since six thirty. I search its windows for suspicious activity—

The station horn sounds. I close my doors and release the brakes. My scales detect a weight distribution inconsistency in car six. It is below the advisory threshold, though. I cannot raise an alarm. Yet the data implies that something is amiss. I am still blind in the rear of the car. In car five, Richard Chen laughs. I do not share his nonchalance. I accelerate into the darkness, ever vigilant. I can only hope that we will arrive safely in West Oakland.

Derrick Boden is a recovering software developer that has taken up writing to kick the habit. Find him at derrickboden.com.

Fence to Fence, by Jennifer Cox –>