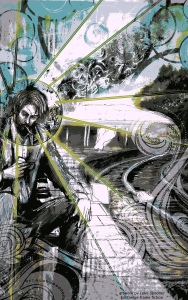 If it lives, what does it eat? Not coal, and if not coal, then nothing that could be reduced to carbon, if it is to be the opposite of a train. This poses a problem. A precise reductionist, Gibreel knows that all organic matter can, if one is so inclined, be reduced to carbon. Sleep and dreams–if Gibreel ever remembered his dreams—will wait for another night, another. This problem of the opposite of a train, it must be solved. He has to know what to look for.

He visits the yards and stalks between empty, waiting boxcars and long, low platforms. Rails run, slick and oil gray, joined by the weathered-roughened ties, beneath his feet. Here and there, a bit of iron ore, black and pocked photo negatives of the oddball moon of Saturn. The trains come and go, and, pensive, Gibreel watches. Attend to them, and they’ll reveal their opposite. Some nights there are ghost trains, the same ghost face in profile behind every window. The ghost face stares straight ahead, refuses to glance out the window, won’t acknowledge the man on the platform or what it’s leaving behind.

Gibreel believes in the inherent logic of laws of science he’s never understood. Equations and formulations have a ring to them; translated, they make a poetic kind of sense. F=G[(m1m2)/r2] means that the pull between two objects can be known. Their gravity, the effect they have on one another, can be calculated. Snow summed up some major laws in a way that still troubles Gibreel. You can’t win, you can’t break even, and you can’t quit the game, Snow said. Which means, of course, that there’s no sense in abandoning the quest for the opposite of a train, even if it means Gibreel will only lose. E=mc2. Another important one, but he’s always had trouble figuring out its true application. Something about the dissipation of energy. Gibreel’s constant must be close to the speed of light. Force equals mass times acceleration; an object in motion: handy in describing daily interpersonal interactions, a simple guide by which he can understand the motivations of others. The magic of fortuitous interactions is described by A2+B2=C2 (where Gibreel is A and his interlocutor is B). Syllogisms and theorems, laws and theories: These are systems designed to help us understand the world. Humans are of the world. Therefore, these laws help us understand humans. Gibreel himself is an undistributed middle.

For every action, there is an equal and opposite reaction.

A train took her away. Only the opposite of a train will bring her back.

K.L. Owens is an MFA candidate at the University of New Orleans’ Creative Writing Workshop. Her work has appeared in The Riding Light Review, Fur-Lined Ghettos, and Ellipsis magazines.

The Best Revenge is to Forget, by Joseph Giordano –>