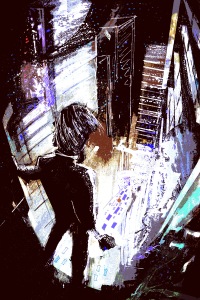 Today I will be a tree and root myself into the cement somewhere between 7th and 8th avenues. Below me, the rush of feet; above me, the dulcet birdsongs.

It is not a decision I make lightly. Yesterday I was a mouse. I scurried from street to street, avoiding feet. I was an infestation: a descendant of a long line of disease carriers

I tried, once, to be a man. Long ago, I tried to be a baby. I was a baby who loved the red of her lips: lips she painted nightly before leaving me in my box.

“Be good,” she said, and pressed those red lips to my face. My nose tasted her pink cheeks—the taste of pineapple. She placed me softly in the box, and closed the ventilated lid. Then she left. I tried to be a good baby in a box, seeing the red of her lips and tasting pineapple in my mind until the next morning when the woman came home to lift me from the dark.

But then I grew too big for my box. I was left in a corner of our small home. The woman no longer pressed her red lips to me. I was bad—she said. I was wicked—she said.

As a child I learned that I was a gift for the woman. A gift from someone named God. But I wasn’t a nice gift. I wasn’t the type of gift that children find under a decorated pine tree. These gifts give children purpose; they make them happy.

The me gift made the woman sad.

“God is punishing me,” she said, “punishing me for my life of sins.” She then put on her tall shoes, made sure her lips were really red, sprayed herself with pineapple, and left. She left and didn’t come back into the next morning, her lips no longer red.

I didn’t like being a bad gift. I didn’t like making the woman cry, but I couldn’t stop it. I tried to be good and count the bumps on the wall like she told me to, but when I grew too tall I could no longer count the bumps on the wall. I couldn’t not look at her when she took off her dress and removed her makeup. She caught me staring, and she caught me fidgeting, and she caught me–––. So she took a rope and tied it around my hands, and tied my hands around the back of a chair so I couldn’t use my hands.

“God will strike you down if you do that again,” she said to me, but I couldn’t stop. And God didn’t come to strike me down, so she kept tying my hands to the chair, crying the whole time.

I didn’t like being a bad gift. I didn’t like being a bad child. The other children—the good ones who got the good gifts under the decorated pine tree—didn’t like me either. They thought I should have their old food, like rotten apples and chewed gum. They thought I should catch the food with my head, but I was bad at the game. The teacher didn’t like it when I came into her room with apple on my face or gum in my hair, so she put me in the special room, the room with the four white walls and the carpet with chunks missing. She slammed the door behind me and clicked the lock, saying that I could stay in the room until I stopped being bad. I felt like I was back in my box, but it was bigger and brighter, too bright to see the red lips or taste pineapple.

I tried to be a man. The last time I saw the woman, she dressed me in the type of clothes you see important men wear. And she told me to take my new clothes and leave.

“God will know that I did everything I could for you,” she said, “and he will judge me fairly. But you have to go.” She pulled on the tie, until it chocked me. She straightened my jacket, and shoved a handful of money in my pocket. She held the door open. It was snowing out. I left and, because I didn’t want to make her cry, I didn’t go back.

I walked around like all the other well-dressed men, the men who carry their phones in one hand and briefcases in another. I didn’t have a phone or a briefcase, so I pretended. I pretended to talk into my hand about the important things that important men talk about. But I was interrupted by a mouse, scurrying from street to street, avoiding feet. The mouse looked hungry so I gave him some money.

“Thanks man,” he said. I had never been called a man before. I had never been thanked before. And it was good. So I found the other mice and gave them some money until I had no more money to give. But I wanted to be thanked. I asked people for money so I could give it to the mice, so I could be thanked again. But no one gave. A woman pushing a stroller called me a filthy mouse when I asked her and I knew I had stopped being a man. I traded my suit for a tank top and baseball cap so I could fit in with the mice. I asked and thanked, but was not thanked anymore. And I scurried from street to street, avoiding feet, scrounging on leftovers, thinking about the red lips and the pineapple, and being thanked, and that I wouldn’t have any of them anymore. And I knew that today was the day.

That I will become a tree.

Alex Benarzi currently writes and teaches in Calgary, Alberta, Canada. He writes to better understand the absurdities of the world.

<– Unraveling, by B. Balder