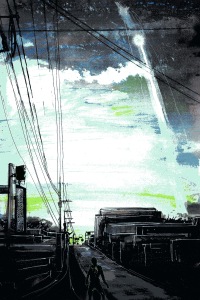 They began leaving before he was born. His earliest memory is of the sky, pregnant with space ships, shuttling people off-world. At first, only the wealthiest went, fleeing a dying planet. They took off in their first-class rockets, champagne fizzing in zero gravity, hovering above and around, some fancy fantasy carrying them to the next livable planet.

You will surely die if you don’t go.

As technology advanced—as the men and women of earth shuddered at the prospect of dying with this planet—space travel became more affordable. Government-led initiatives gave people the option to fly for free in exchange for employment contracts on a new planet. People, sick and impoverished, leapt at these offers and shot straight up into the sky, watching the decaying earth shrivel up behind them. Until there was only the vast emptiness, a clean slate upon which they could make new mistakes.

We are going. We have secured passage on the next shuttle out.

You will die, do you understand?

This is all I’ve ever known. This dry patch of land, this pale brown sky, this desiccated world. This is home.

The rockets traveled with less and less frequency. He walked along the concrete, looking up at the sky, seeing only wisps of clouds. He imagined the earth rejoiced as the weight of mankind sloughed off her surface, as they went on to spoil some other plane. And, overwhelmed by the pressing choice, he began to cry. Because the great yawning beyond was too much for him to handle. This was all he’d ever known. And yet he’d lose everything, everyone, if he could not bring himself to go.

Please, come with us. We’re going to mars. You know mars. It’s so close.

His throat dried up, shriveled at the thought of leaving. Of stepping into unfettered, uncharted space, spiraling out, out toward nothing and nowhere. He had seen the shuttles explode, fiery eruptions and debris ricocheting through the atmosphere, falling like some hellstorm upon them.

We have land. A new start. We won’t be poor there any longer. And we’ll be together.

If I could go.

He looked at her. At the gentleness in her eyes, at her love for him.

The shuttles were sparse. Last-minute escapees crowded the port. They babbled about which planet or moon they were heading to, some opting to go as far as possible, excited by the idea of sleeping for years, to wake up the same age and older, to be able to explore a new world. Such bright hope bristled from within them. Possibility. And he felt smothered, suffocating in the early morning heat. She held his hand.

The building rumbled and the lights flickered as several shuttles took flight. White smoke rolled in currents toward the tall windows. The engines roared, a heavy hum digging into his head, traveling further and further until they were less than a whisper. I will be that, he thought. I will be that whisper. He let go of her hand and walked to the window, a white haze blanketed over the landing strips. More shuttles were brought around, these heaping bodies of metal, these man-made monoliths waiting to take them into an impregnable nowhere.

He ran, leaving his luggage behind. Through the desolate streets, he fled, to the vacuous home he was born to. Cracked concrete and crumbling skyscrapers, a gaping and empty sky, rotten vegetation spoiling on the ground, choking, all choking slowly. He ran and hid until the shuttles all left.

The lights did not turn on that night, or any night after that. Walking out of his home, he let the door shut behind him, not bothering to lock it. The moon hid behind a veil of pollution, a dim orb hanging in the sky, a ghost haunting the planet in its shivering darkness. He’d never known the stars. But maybe, he thought, one day. A chill swept through the night, a familiar cold, heavy and comforting. He sat on the hood of an old car, tucking his feet under him, and waited, waited.

Jessica R. Santillan was born in Bakersfield, CA. She received her MFA in Creative Writing from Fresno State, where she worked as an editorial assistant for The Normal School. She has had her work published in the San Joaquin Review, Siren’s Call, and Cactus Heart.

<– We Never Are What We Intend, by Holly Lyn Walrath

Unraveling, by B. Balder –>