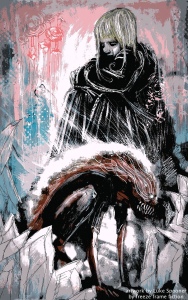 First she found the slipper-glass, a fragile, inch-long dagger poking from the dirt. Her heart twisted. Then the lizard scuttled over the floor and up the felled stones of the shattered back wall. Eyes prickled. Then a snatch of soul-breaking music floated over the water. She was sobbing, just sobbing, face in hands, body sprawled shaking in the ashes of her home.

“I’ve got to get back,” she grieved. Not one thing answered. Raising her head to peer beyond the black and broken beams saw the terrible, treacherous river, then the forest, and the gauzy ethereal towers of the Prince’s castle, grave of all her hopes.

The lizard stared from a splash of leaf-tinged sunlight. He reminded her so much…

Of course there could be no connection between this creature and her lizard, her coachman. How handsome he had been, perched on the pumpkin carriage. Except for his eyes, which wouldn’t stop swivelling in independent directions. And his tongue, which kept darting out at flies.

What stuck with Ella most was how he’d never smiled. Everyone else that irrecoverable night had smiled incessantly but her lizard had seemed touched with barely-concealed rue as if already guessing how everything would end. Ella’s fingers tightened on the slipper glass, and the pain made her feel like a child again, as if forty or fifty years had not been snatched away from her, as if everything was still to be done and any second now the door would open and a tiny figure would float in on the breeze, bright with laughter and promises.

Except there was no door. No roof, no food. And no fairy godmother. The Queen had caught her and stuck her in a jar on the mantelpiece then stoked the fire beneath her. The frantic buzz of tiny wings had burned through the Queen’s bleak lecture.

“Of course you love him, girl. He’s the Prince. You’re meant to love him. Everybody is. But you can’t have him. Never for more than one night.”

Ella had not seen her Godmother since then.

The last time she had tried to get back into the palace, there’d been nobody to help. She’d made a raft from one of the house doors and almost drowned paddling it over the river.

She had not even got past the front door. The footmen had just looked at her and laughed. One held up a mirror to show exactly how treacherous the river currents were, how much the crossing had cost her. In the glass she saw that she was old. Half her life had been washed away in the stream.

Her hand tightened on the slipper glass. She dropped it on the floor, brought her foot down sharp on the deceitful thing. Again. Again. Doing it till the blood came.

There were no bandages. She tore a piece off her shawl, wrapped it round her foot. She sat and squeezed the cloth against her skin. And the lizard jumped from his perch and scurried carelessly through the gore and ground glass. She stared in shock and wonder as he changed.

He was no coachman. Not this time. This was a figure of blood and fury, with an axe in one hand and a knife in the other. His eyes were smoke, his mouth a savage red. But beneath his rage and potency she sensed that tincture of sadness.

“What do you want this time?”

Did he really need to ask? She closed her eyes to imagine his blades at work, shattering the doors of the forbidden castle, carving through arrogant, pampered flesh.

“Can you do it?” she whispered. “Can you break through all that stands between me and my prince?”

“Of course,” he declared, as arrogant as love and certain as destruction.

He hesitated. Looked down at the ground. “I can try.”

“I dare say you can. But are you likely to succeed?”

He did not answer. Ella sighed. “And I suppose you’ll vanish as soon as the clocks strike midnight.”

He shrugged, denying nothing.

She got up and dusted herself down. She took a last look at the castle. So beautiful.

There were no clocks this side of the river.

“Probably best forget it,” she said. “Better chop some wood. I’ll sift through the wreckage for stuff we can still use. We need shelter first; it’s going to rain in a bit. And maybe a fire later, when it gets dark.

And he looked at her and nodded. And he smiled.

Jeremy Minton is a writer of software and of speculative fiction living in the East of England. He enjoys cats, cricket, snooker and good wine, not necessarily in that order. He’s had previous sales to Daily Science Fiction and F&SF amongst others.

<– The 29th Story, by Carrie Naughton

Just Us, by Barbara Harroun –>