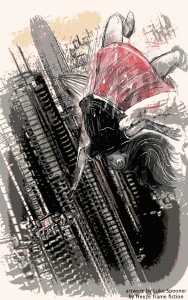 If you have seen Li Wei’s photographs, then maybe you have seen his ‘Free Degree Over the 29th Story.’ And if you have seen that image, then you have seen me, even though I am not usually one who enjoys being seen. I am the girl who delivers lunches to the offices at the Jianwai SOHO complex in Beijing. Maybe you have given me a bad tip sometime, and in that case I might remember you.

That day when I brought food up to the twenty-ninth floor, I arrived early. Li Wei’s people, busy with the wires and the mirrors and the photographic equipment, made me wait after I had laid out their various takeout orders on a table. They did not seem to care that their noodles were getting cold.

The anticipation and the tension in that small, converted office captivated even me. I watched Li Wei work. I did not know it was him at the time. I only saw a nondescript man wearing jean shorts and brand new combat boots. He directed a crew of technicians in what seemed to me an overly elaborate attempt to wash the buildings’ windows. Anything is more entertaining than delivering lunches, so I hovered the way I do, and I observed.

One of the men moving the scaffolding saw me near the door and took me for an apprentice. Before I could protest—and I am not sure I would have—I found myself in the middle of a group of models. Orchestrated by Li Wei, we leaned collectively forward over a windowsill prop, as if reaching for our lost loves, arms a tangle of elbows and fingers. The cameras clicked and flashed.

It was then that I asked a woman near me—you have seen her, too; she is in the foreground of the piece, the woman in the blue t-shirt with her dark hair parted in the middle—I asked, what exactly is happening in this office? She told me with great enthusiasm about Li Wei’s project, and his fantastical vision. In the finished photograph, he would appear to be falling out of the building, held back only by our outstretched hands.

I gazed around the room at the various tools and props required to create such a graceful illusion.

It would be so much easier, I replied, if he could truly fly.

The woman laughed, shrugged. Would it be art, then?

I did not tell her, because I tell no one this—until now—that I can fly. It is too bad that Li Wei did not know this, or he might have chosen me to be the one clinging to those hands, clinging to reality.

I only fly after the sun sets, but I can tell you that I have seen the SOHO building from the outside at midnight, lit up from within in random squares populated by people like you—working at whatever it is that you must accomplish at those desks. I have soared like Li Wei only pretends to do, with my limbs spread wide and the air currents rushing up the glass walls of the skyscraper, buoying me up and up.

Sometimes, when I am in the sky like that, I contemplate never coming back down. What if I decided to stay aloft, to let go, to drift away into the Beijing smog? Those moments, I wonder what you feel, when you gasp in delight and terror at Li Wei’s photograph. If it were me instead of Li Wei, suspended twenty-nine floors above the city traffic, would you care?

Would you worry—what will happen, if she lets go of those hands? Who will deliver our lunches?

Carrie Naughton is a freelance bookkeeper who writes speculative fiction, environmental essays, and poetry. Her poetry will soon be published in NonBinary Review and Star*Line, and her flash fiction piece ’The Splendid Mendicants’ was just published by the online journal Slink Chunk Press. She reviews women’s speculative fiction audiobooks for Luna Station Quarterly and blogs frequently on her website about whatever captures her interest.

<– The Kitchen is Burning, by Line Henriksen

And Maybe A Fire Later, by Jeremy Minton –>