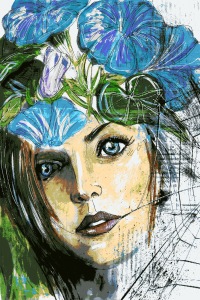 Today I crouched in my corner of the playground, nestled between the morning glories that climbed the fence separating the school from the neighbors and the rotting garden shed. It was close enough that the teachers left me alone but far enough away that I could ignore the metal bars, the rubber mulch, and the loudness.

“Hi, Charlotte,” I said glancing up at my spider friend, not wanting to disturb her. I snipped a purple blue flower from the vine with my fingernails. Her web clung to where the vine tickled the shed. I noticed she didn’t have any bugs today and thought if I saw a small one, I’d give her a midmorning snack.

Before beginning my dissection, I smoothed out the dirt in front of me and examined the specimen. The bright pink center popped next to the deep blue of the morning glory. I removed the calyx and set it at the bottom center of my space. Then I separated each petal and made a circular pattern with them. I sorted the pistil from the stamen and completed the pattern. I placed the larger pistil in the center, and surrounded it with the more delicate stamen. I sat back and appreciated my work—it reminded me of watching the ballet. My layout was much prettier than the way we did it in class. I never could understand why the teachers couldn’t see the beauty in science.

Next came the best part: labelling. It made me feel like a real botanist. My hand slipped into the weeds that grew against the shed wall and found the stick I’d sharpened with a pencil sharpener. Parts of a Flower, I carved into the dirt at the top. Then, I drew a line coming from the green base and wrote, caly—

“Whatcha doin’, Icky Vicky?” The girl’s singsong voice came with a kick to my right shoe and a cloud of fine dirt. Her wild hair cast a shadow over the dissected morning glory, making it look like I was being attacked by a giant muppet.

“None of your business, Reggie.” I hid my stick behind the dandelions. “And don’t call me that; my name is Victoria.”

“You hiding something?” She dropped to her knees, destroying my work in the process. Her body pressed against me as her hand darted behind the little yellow flowers.

“Nothing. Just go away already.” But it didn’t matter.

Reggie did whatever she wanted. She had ADHD and no dad, so the teachers let her get away with anything.

She emerged holding my stick, a triumphant smirk on her face. “Dumb,” she said as she tossed the stick aside. That’s when her eyes shifted up, to the spider web.

I could have begged her to leave, but that would’ve encouraged her to stay. Or else gotten me punched in the gut again. So I turned myself into a statue and hoped she’d get distracted or maybe spontaneously combust.

“Whatcha got in your lunch today, Vic-TOR-ia?” Her eyes bulged when she said my name, but she did shift her gaze. Her hand groped for the discarded stick.

“Leftovers,” I lied. Leftovers were hard to share. Not to mention Reggie was grossed out by the curries and stews my mom sometimes sent.

“Eeew.” She guided the point of the stick to Charlotte and wiggled it in front of her. “You’re gonna stink up the lunchroom again, aren’t ya?”

I crossed my fingers and held my breath. Maybe she just wanted a closer look.

“Pretty sure your mom is trying to poison you.” The spider evaded the stick, so she changed tactics. She pulled a leaf from the vine.

“I might have a dessert in my lunch too.” Losing my treat would be worth it if I could give Charlotte enough time to escape.

“That’s more like it.” Using the leaf, she flipped the spider onto her back and held her there with the stick. “Wait, is it one of those lame dried fruit things?”

“Thank god.” She looked around like she was searching for something. “Your mom is such a freak.” She picked up another stick.

“Please stop.” I thought about taking the stick from her. Stopping her from doing whatever it was that she was going to do. But my arms held onto my tummy instead.

“Let her go. You can have my chocolate.”

She chuckled like I’d told a joke. “Okay,” she said. Then she stared down at the spider still trapped by my writing stick.

She took the other twig she’d found and, one by one, crushed the spider’s legs. She twisted them and pulled them away in the dirt until Charlotte’s body looked like the sun surrounded by rays of dirt smudges. My eyes burned, but I wouldn’t make her day by crying.

I tried to move, to say something, to do something, but I just sat there. Useless. Just then, the teacher blew her whistle.

Reggie dropped the stick, stood up, and dusted off her butt. The dust blew into my face, but I held my breath so I wouldn’t cough.

“I’ll find you at lunch for my chocolate,” she said as she ran off to join the line.

I yanked a new leaf off the vine, brushed Charlotte’s body onto it, and nestled her behind some greenery at the back corner of the shed. I picked a morning glory and lay there, where it would shrivel and wilt by lunch.

M.K. Langley quit her job as an elementary teacher focus on more creative pursuits. She is currently working on a Master’s in Creative Writing and trying to be patient (mostly unsuccessfully) with her three children.

<– And Now, Playing Us Out, The Sweet Sounds Of Legendary Jazz Trumpeter UNCO-895i, by Paul A. Hamilton